When I first mentioned bees in a June 2007 blog about grapevines, it was thought that a fungus was killing beehives and causing Colony Collapse Disorder. Since then we’ve discovered there are multiple causes, including pesticides.

In June 2013, a landscape company sprayed 55 linden trees in a Wilsonville, Oregon parking lot because they wanted to kill aphids. The landscaper used Safari, a neonicotinoid and killed 50,000 bumblebees by their actions. Fifty thousand! Unfortunately, fines for violations of pesticide use are minimal. It’s hoped that fines will now be increased to something far more punitive than $555. Other similar incidents prompted an investigation by the Oregon Department of Agriculture which has now banned a dozen pesticides.

Just a few weeks later, in July 2013, 37 million honeybees were found dead on just one farm in Elmwood, Ontario, Canada. Samples collected showed yet another neonicotinoid pesticide had killed them. And it’s been happening for years. Our crops have to be protected from disease and other insects but not at the expense of the bees who pollinate crops.

Friends of the Earth

The crisis is happening across North America and throughout the world! Check the Internet for other stories and updates. They will make you very angry. Our food crops are in great peril. Visit the Friends of the Earth website and their bee campaign to read shocking statistics. Even the flowering plants we purchase from major DYI stores are pre-treated with bee-killing pesticides and most consumers don’t even know what we are buying.

Go to RealNews24 for a long list of foods we will lose if we don’t save the bees. The FDA won’t do it for us (quite the opposite) and the EPA has been dragging its feet. We can get involved by taking action: write to EPA Administrator, Gina McCarthy, and ask her to make pollinator protection a priority. Go to Save Bees.org to sign the petition. You can try the EPA website but it does not readily yield contact information. You can call 202-564-4700 or try Ms. McCarthy’s Facebook page.

And ask Congress to pass H.R. 2692 Save America’s Pollinators Act, introduced by Representatives John Conyers (D, Mich.) and Earl Blumenauer (D, Ore.) The bees can’t wait any longer and neither can we.

This honeybee died before my eyes. He crawled over the wall on the grapevine and then fell to the ground. 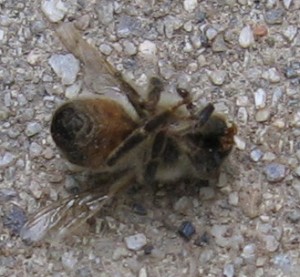 In a couple of minutes, he was gone. I don’t know what is being sprayed in our neighborhoods or by whom. The ants were waiting and within a couple of hours, all of him had been carried off. Perhaps the ant colony will also suffer. It is hard to tell.